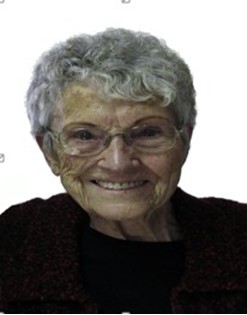 Guestbook 6
Edna M. Dooley died at the Help For Health Hospice Home on January 11, 2021. She was 95. According to her wishes cremation has taken place and there will be no services.

Edna was born November 11, 1925 on the family farm on Riverview near Riverton to Emile and Victorine VanDell. She attended Riverton schools and graduated in 1943.

Edna married William D. Dooley on October 13, 1942 at Rawlins, Wy. Bill enlisted in the Marines and Edna followed him to California where she supported the war effort packing airplane parts for Vultee Aircraft Co. The couple later were transferred to Farragut, Idaho for Bill to recover from wounds received in the Battle of Iwo Jima. In 1946 the couple returned to Riverton and worked for Northern Utilities at the Sand Draw field.

In 1953 Edna’s husband went to work for the Wyoming Game and Fish Department as a Deputy Game Warden. The couple spent the next 25 years in Jackson, Saratoga and Meeteetse Wyoming.

In 1978 Bill retired and the couple returned to their hometown, Riverton.

In retirement Edna took great pleasure in helping her sister, Laura, at the family farm, going to garage sales and doing yard work. Edna was an avid bridge player and always imparted wisdom and advice with brutal honesty. She was a voracious reader, averaging two plus books a week and thoroughly enjoyed working jigsaw puzzles. Edna maintained her alert mind to the very end. Always reminding her loved ones what needed to be done and how to do it.