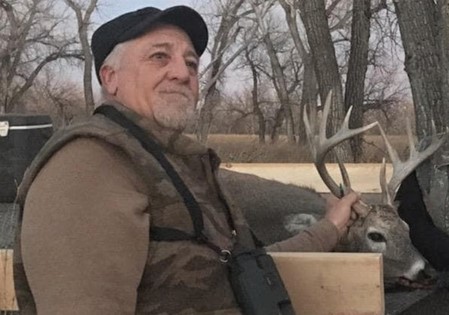 
Richard Jack Weliever, 58, of Riverton, passed away from a drowning accident on Thursday, January 14, 2021. A service will be held for him at 10:00 am on Saturday, January 23, 2021, at the Fremont Center at the Fremont County Fairgrounds. With a catered reception to follow.

Richard Jack Weliever, according to his birth certificate, was born on October 11, 1962, however somewhere along the way, his mom Mary Lee accidentally changed it to October 10th, and so the 10th is the day he chose to celebrate it on. He was born in Riverton, WY, to Frank Henry and Mary Lee (Goodwin) Weliever. He attended school in Riverton, completing the 10th grade, then started his career in the oilfield.

On July 25th, 1985, Fran asked Rich, “If I fall in love with you, will you Catch me?” Rich said “Yes!" and on December 7, 1985, he married Francine Kaye Ward in Casper, WY. They celebrated 35 years together in December. They resided in Casper, where both of their girls, Erika and Sarah, were born. After a short stay in Greeley, Co. They then made a move to Riverton, making it their forever home for the past 25 years.

Richard, (“Fatboy”, as he was known to his oilfield buddies) was a proud oilfield hand all his life. He broke out with Dixie Lyn-Field Drilling in Riverton. He then went to work for Grace Bomac in Casper, WY. Then started his move up the ranks with Kenting Apollo in the late '80s, surviving the transitions to Caza and then Ensign Drilling, having been a Rig Manager for the past 25 years.

Richard loved to hunt, fish, go 4-wheeling, camping, old Ford Trucks, collecting guns and knives, rock hunting, and going to the casino. He loved his dogs, spending time with his kids and family, and you would not have escaped a conversation with him, without him giving you a hard time. He was rough around the edges but had a heart of gold.

He was preceded in death by his parents, grandparents, and niece, Kali Jo Allgood.

In lieu of flowers, the family requests donations be made to PAWS, in care of Davis Funeral Home, 2203 West Main Street, Riverton, WY 82501.