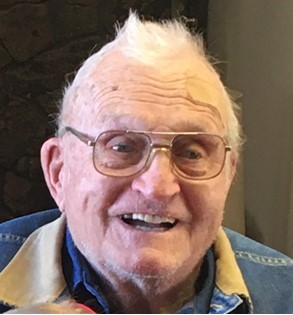 John Henry Osborne was born on July 25, 1933 in Denver, CO to Richard Scott and Mary Delores (Nozicka) Osborne. He was baptized into the Roman Catholic faith and he grew up with his older brother, Richard, in Thedford and Atkinson, NE. He graduated from Atkinson High School with the class of 1952. After High School, he attended Wayne State College in Wayne, NE, where he played football. After his first year of college, he was drafted into the U.S. Army. He joined the Army boxing team, where he won many competitor titles. After being honorably discharged, he returned to Nebraska where he worked in the oilfield industry.

During his time as a truck driver for the Denver-Chicago Trucking Co., he met his future wife, Doris Yvonne Wieger, in Kimball, NE. They were married in Durango, CO, on October 5, 1959. They moved to Riverton, WY in 1961, where they made their forever home and raised their four children.

John worked for Neuman Trucking, Westwood, and Herman Trucking until 1966 when he started his own trucking company, Osborne Trucking Co., Inc. Along with the trucking company, he also later owned and operated a successful cattle ranch. He was still involved in both operations at the time of his passing.

He was a member of the Lander Old Timer’s Rodeo Association, the Wyoming Trucking Association, and the Fremont County Cattlemen’s Association. He was an avid supporter of all local rodeo activities, FFA, and the CWC booster club.

John enjoyed roping, all dogs, cattle, and horses. He would never turn down having coffee and a good conversation with anyone. He enjoyed hearing a good story, and his own storytelling skills were legendary.

He was preceded in death by his parents, Richard Scott and Mary Delores Osborne; brother, Richard Franklin Osborne; and niece Rosemary Anson.

**The family kindly requests that those attending the funeral Mass in the Gymnasium to please wear face masks as we appreciate that we are able to have a larger funeral as long as COVID guidelines are followed. Additionally, as the funeral is taking place in a private school gymnasium where children, teachers and staff will be, we want to take every measure necessary so that we may have the funeral Mass and still keep the school safe. We thank you for your understanding.

Memorials may be made to the C.W.C. Rodeo Team or to St. Margaret’s Catholic School in care of the Davis Funeral Home, 2203 West Main Street, Riverton, WY 82501.