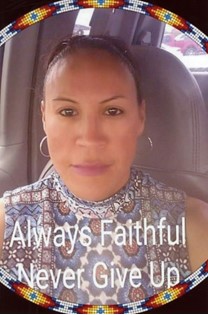 Melissa April Brown was born on October 4, 1976 in Riverton, WY to Andrew Brown, III and Geraldine Ann (SunRhodes) Brown. She was an enrolled member of the Northern Arapaho Tribe. She grew up on the Wind River Reservation and graduated from St. Stephens High School with the class of 1993.

She worked as a CAN, carpenter, flagger, and at the casino. She enjoyed her work.

Melissa was a mother, daughter, sister, and grandma to many people. She was a homemaker that enjoyed cooking especially at the holidays and going to the casino with her family. She was a mother figure to her brothers and loved taking care of her father. She also enjoyed spending time with her two sons, going to the mountains to help get wood. Melissa was the one to always count on, she was always willing to help.