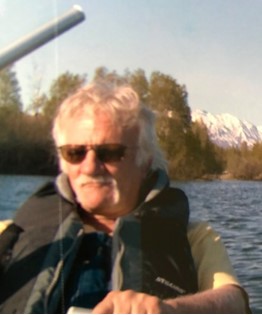 
Franklin Lawrence Casebolt otherwise known as Santa, ended his journey here on earth on Wednesday, February 24, 2021 in Rock Springs, Wyoming and returned to his true home to be with his son, Mikey in the presence of our Lord and Savior, Jesus Christ. Frank was born on April 4, 1953 to Harold and Maria (Brunetti) Casebolt in Salt Lake City, UT and grew up in Ogden, Utah, graduating from Ogden High School.

Frank spent a good portion of his life working as an over the road truck driver. He really enjoyed the travel and relished the opportunity to see so many parts of this nation. He went on to own a salvage and tow company in 2000 until the oil field called him in in 2013, where he worked for R&R Oil Field Service until his retirement on December 19, 2019. Frank was known for being an extremely hard worker anyone could count on. He and Cheryl spent time living in California, Arizona and Alaska but made their home base Lander, Wyoming.

Frank’s greatest joys came from his grandchildren and playing Santa Claus at Christmas time. Cheryl wasn’t fond of the beard but that was part of what made him Santa. He would dawn that beard and Santa suit and transform into the role as if he was born to do it. Frank would take the time to listen to each child’s heart felt request, and if someone tried rushing him through connecting with the child on his lap, they would experience Frank’s wrath. He never took a single payment for his services, his payment was witnessing the delight and wonder in the children’s excited eyes. He gave many children hope and happiness. Frank loved his wife so deeply they could never stay apart from one another for very long. He taught his sons to be good men and cherished his sweet daughter. Frank left an enormous hole in the lives of the people who knew and loved him. Frank also loved God and had a precious relationship with the great I AM. He was rough, rugged, and stubborn as can be, but he also loved deeply. This is what made Frank so special to so many people.

He was preceded in death by his father Harold Casebolt, his mother Marie Casebolt, and his son Michael “Mikey” Casebolt; granddaughter, Erica Lynn Johnson. A Funeral service for Franklin Lawrence Casebolt, 67, will be held at 10:00 a.m., Saturday, March 6, 2021 at the Word of Faith Family Church, 515 S. 2nd St. in Lander, WY with Pastor Dan Bauer officiating. Interment will follow at Mount Hope Cemetery. A Viewing will be held from 6:00 until 7:00 p.m., Friday, March 5th at the church.