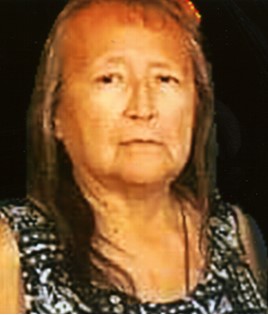 Margaret Nell Spoonhunter was born in Lander, WY on September 6, 1958 to Stanley Joseph Spoonhunter, Sr. and Jessie (Shakespeare) Spoonhunter. She was given her Native American name, Woman Singing in the Front. She grew up in Arapahoe area and attended school in Lawton, OK. She graduated high school and went to two years of college.

Peggy was baptized into the Catholic Faith and was a strong believer. She also was a firm believer in the Arapaho Way of Life.

She was a homemaker that loved taking care of her family. Family was the biggest thing in her life, she raised many children. She loved taking walks, small dogs, reading, feeding wild birds, and planting flowers, gardens, and trees. She traveled and attended many Pow-Wows and was a big part of the Northern Arapaho Sundance. Derrick loved spending time with Peggy and she with him.