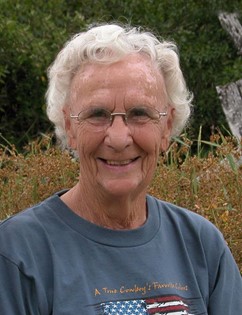 Guestbook 4
Funeral services for Elisabeth M. “Liz” Christensen of rural Riverton will be conducted Monday, November 24, 2008, at 10 a.m. at the United Methodist Church in Riverton, with the Rev. Mark Thurman officiating. Interment will follow at Mountain View Cemetery. A viewing will be held Sunday, November 23 from 4 to 6 p.m. at Davis Funeral Home. Liz died Wednesday, November 19, 2008, at Wyoming Medical Center after a brief illness. She was 84 years old. Elisabeth Marie Monrad was born October 29, 1924, in Omaha, Neb., to Ivan Monrad and Karen Posborg Monrad. She grew up and graduated from high school in Omaha. She was employed by the telephone company during World War II. On May 12, 1946, she married a handsome serviceman, Paul Christensen, in Omaha. They lived in Brush, Colo., and farmed his father’s place from 1946 until 1948, when they drew a homestead in the Riverton area. Paul began farming near Midvale at that time, and Liz joined him in 1949 with their two sons ages 1 and 2. Their daughter arrived in 1954. They are the only remaining homesteaders still living on their original place. Their 62-year marriage has been an inspiration and example to their children and grandchildren. As an active member of the United Methodist Church, she was a Sunday school teacher for many years. Liz was a homemaker and had worked for several years as a scale operator at area beet dumps for Holly Sugar. She was a familiar figure at the Fremont County Fair, where she clerked for many years. She was also active in various clubs and organizations in the 8-Mile area, including 4-H, O.A.O., and pinochle. Liz loved square dancing, and she and Paul had been members of the Riverton Hoedowners for more than 35 years. As her kids and grandkids can attest to, they loved to dance and were often the last ones to leave the dance floor.

Liz loved to do counted cross stitch, and followed her children, grandchildren and great-grandchildren in their sporting events and other activities.