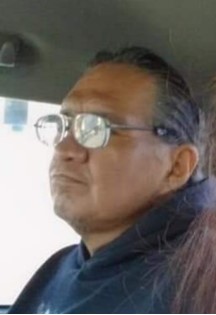 Guestbook 3
Alfred M. Spoonhunter, Jr., 53, of Arapahoe passed away on Thursday, March 25, 2021. A wake will be held on Sunday, March 28, 2021, at 149 Sagebrush Loop in Beaver Creek, starting at 7:00 pm. A Native American funeral service will be held at 10:00 am on Monday, March 29, 2021, at the Fremont Center located at the Riverton Fairgrounds, George Moss will officiate. Burial will follow at the Arapaho Catholic Cemetery with Father Jim Heiser officiating.

Alfred was baptized into the Catholic faith and was also a member of the Native American Church. He was active in the Northern Arapaho Sundance.

In July of 1987 he married Lori Ann Norse in Fort Washakie, WY. She preceded him in death.

Alfred worked as a full time carpenter, for tribal housing, and was on the security team at 789 Bingo Hall.