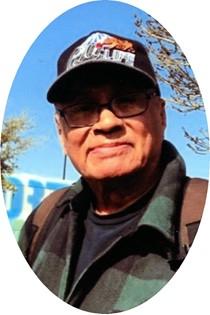 Guestbook 3
Oliver “Bob” Headley, 68, of Lancaster, CA passed away at the Antelope Valley Hospital in Lancaster, CA on Thursday, April 1, 2021. He is being brought home to rest on the Wind River Reservation. A wake will be held Tuesday evening, April 13, 2021, 266 17 Mile Road. Traditional graveside services will be 2:00 p.m., Wednesday April 14, 2021, at Yellowcalf Cemetery.

Oliver Jesse Headley was born on July 26, 1952 in Fort Washakie, WY to Arnold B. and Margaret Mary (Willow) Headley. He lived on the Wind River Reservation growing up and attended Mill Creek Elementary School, Fremont County Vocation High School and graduated from Wyoming Indian High School. He then attended Central Wyoming College for a year before going to Southwestern Indian Poly-technical Institute (S.I.P.I.).

Bob was baptized and confirmed into the Episcopal faith. He was an altar boy and worked the pancake suppers to help raise money.

Bob lived in Cook City, MT doing road construction and Casper, WY doing construction. He was a Sho-Rap Firefighter. Most of his career was working for the U.S.G.S. guide for mapping fossils. He moved from the Wind River Reservation to California in 2018 to be with his family.

Bob was a member of 4-H, loved agriculture and had a natural green thumb in gardening. He was a member of the Ethete Boxing Club and took two State Golden Gloves Featherweight Titles in 1968 and 1969. He was a four state boxing champion of the states, Montana, Utah, Colorado, and Wyoming. He also ran track for Fremont Vocational High School. Bob loved horses and antique cars.