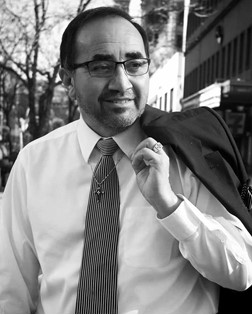 Guestbook 11
Funeral services for Joe L. Sifuentes, 67, will be held at 10:00 a.m., Saturday, May 1, 2021 at Lighthouse Bible Church. Interment will follow at Mountain View Cemetery with a reception to follow at the Reach Foundation Clubhouse. A Viewing will be held 6:00-8:00 p.m., Friday, April 30th at Davis Funeral Home.

Of all the titles he had, his favorite was that of a husband. He married his bride, Shirlee Sifuentes, on April 22, 1972, and together they began to write their love story. He adored his "Sho," his "candy girl," which resulted in the family that he cherished most on this earth. Their love story is a true example of the love God has for His bride and the love God has called every husband to have for their wives. Together Joe and Shirlee walked out their vows, hand in hand, until the end, 49 years and one day.

Daddy, Dad, and Pops are the names his children affectionately call him. His children and their spouses were his world. He lavished them with love, affection, wisdom, and strength. He was the best father, mentor, pastor, and friend to each of his children and had the highest honor of leading each child to a personal relationship with Jesus Christ. He trained his children in the way they should go, and they have not departed from it.

He was called Papa by his grandchildren Kenisha and Brandon Fullerton, Kierra and Kendric Muehler, Zedekiah, Jeremicah, Zion, Jodeyah Mills, and Zareesha and Geoffrey Norman Leier. He is a great-grandfather to Azirah Mills.

The youngest of fourteen, he held the titles; son, brother, tio, and uncle. Though he was the youngest, his healing as a child was instrumental in the entire family's salvation story. He quickly grew to be the spiritual leader, not just to his parents but also to all of their offspring. He was and will remain a beacon of light, love, and hope for all remaining families to follow.

Pastor is the title he is known by in the community, his network of friends, and fellow laborers in Christ. Although he began as an evangelist, God quickly called him to the office of a pastor. It was not just a title to him. It was a calling. In his words, "I do not want to live and serve according to my personal preferences. Instead, I long for my life and ministry to be driven by the Person and Presence of God!"

He transitioned his father’s church into what is known as Way of the Cross Assembly of God. He also pastored at Billings Praise Center and most recently founded Crown of Life Fellowship. He served a total of 43 years in ministry. He touched countless lives as a pastor, presbyter, and chaplain of both The Riverton Police Department and the Fremont County Sheriff Department. He was a crisis, family, and marriage counselor. His formula for success was to love God and love people.

His passion was preaching and teaching the Word of God. He was best known for his remarkable ability to bring a personal touch to any service he officiated. He also enjoyed Facebook, “poker nights” with the boys, shopping for suits and ties, fishing, writing poetry, good day smiles, and he enjoyed his sweets.

He is survived by his wife Shirlee Sifuentes, his children Stacie and husband Jason Muehler, Delilah and husband Michael Mills, Desireé and husband Aaron Hunter, Josiah Sifuentes and wife Madelyn and those he loved as his own children, Nelson Valerio and Lisa Beebe. He is also survived by his siblings Irma Holguin, Phylis Trujillo, Rafael Sifuentes, Pedro DeLeon, Linda Valadez, Roberto Sifuentes, and Anastasia Ramirez as well as several nieces, nephews and in-laws.

The outpouring of love and affection proves just how much Joe L. Sifuentes lived a "BIG TIME" life and was "Top of the Line.”