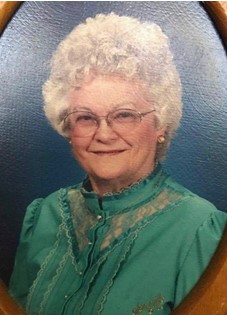 Guestbook 1
Dorothy Mayrene White, 93, passed away in Lovell, WY, on Thursday, April 29, 2021. A graveside service will be held at 2:00 pm on May 13th at Mountain View Cemetery in Riverton, WY, where she will be laid to rest next to her beloved husband, Ivan.

The graveside service will be preceded by a viewing at 12:30 am to 1:30 pm at The Davis Funeral Home, 2203 West Main Street, Riverton, Wyoming.

Dorothy Mayrene Minard was born on February 6, 1928, in Scottsbluff, NE to Levi and Susan (Gibson) Minard. The family moved to Riverton, WY in 1940 where she graduated from Riverton High School in 1946.

After high school graduation on May 20, 1946, she married Ivan Douglas White. They made their home in Midvale near Ocean Lake. They moved down the Missouri Valley towards Shoshoni in 1956. Ivan farmed and worked in the Beaver Creek Oil Field while Mayrene set about being a homemaker and raising their five boys. The family bought an 800 acre ranch in 1963 on the Greybull River near Burlington, WY, where they raised cattle and hay was the primary crop. In 1968 a son, Frank, joined the other 5 brothers. In 1969 the family moved to Ashland, MT and ranched along the Tongue River for three years. Mayrene was secretary at the St. Labre Indian Mission in Ashland, MT for twenty-two years.

Mayrene’s husband, Ivan, passed away in 1994. In 1998 she moved to Forsyth, MT, to be near her son, Dennis. In 2016, Dennis passed away suddenly. She stayed in Forsyth until June, 2018, when she moved to Lovell, WY to be near son, Joe, and family. After a fall and medical issues, she moved into the New Horizons Care Center in Lovell, WY, in March 2021, where she resided until her death.

She was preceded in death by her parents, Levi and Susan Minard, husband, Ivan, son Dennis, and brothers, Lloyd and Lyle.

Online condolences may be made to the family at Davis Funeral Home.

Services are under the direction of The Davis Funeral Home, 2203 West Main Street, Riverton ,WY 82501.