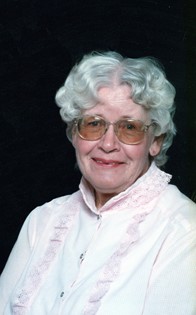 Ada Mae Ward was born on April 28, 1932 in Felt, ID to Charles Heber and Nancy Carolina (Decker) Ward. Ada was raised in Badger Creek, ID going to a one room school until 5th grade when the family moved to Parker, ID.

On June 4, 1949 she married William S. Hancock in Lander, WY and they made their home in Fremont County, WY on various ranches that employed William until they built their oun in the later 1970’s. They had two sons and had been married for 63 ½ years until William passed away in 2012. She was a devoted ranch wife who provided any role that needed filled to help her husband on the ranch. After William’s passing she continued to be a intricate role in the family ranch up until her death.

Ada was a fantastic cook who could keep a meal warm for hours for a hungry crew. There are many people around the country who ate at her table. She was also an avid seamstress who provided homemade clothes for her family all through her live. In her spare time she enjoyed needlepoint and rock hunting.

She was preceded in death by her loving husband, William Hancock; son David Hancock; parents; and eight siblings.