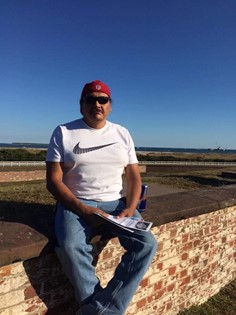 Duane Russell Bell was born on August 6, 1972, in Riverton, WY, to Duane Russell Bell, Sr. and Anita Marie (Spoonhunter) Bell. He grew up in the Arapahoe area and attended schools at Wyoming Indian and received his high school diploma from Kicking Horse in Ronan, Montana. He also attended Central Wyoming College for a year. He lived all of his life in the Arapahoe area.

Duane was baptized into the Catholic faith and also believed in the Arapaho Ways.

He worked as a ShoRap Firefighter for many years.

He loved fishing, camping, old coins, was a 49’er fan, and going to the casino. Above all he loved his family and his dogs, T.J., Spotty, Almond, Hisei, and Flopsey.