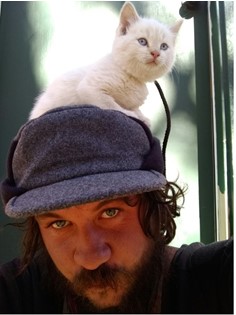 Guestbook 0
MICHAEL DAVID LOTT (February 27, 1989 – June 13, 2021) Michael (Mike) was born in Texarkana, Texas to Charles Lott and Stacy Lott. He grew up in Wake Village, El Paso and Rockwall, Texas. Mike was a shy child but one who brought flowers to his Mom as often as he could, picking them on the way home from School.

Unfortunately Mike was bullied in School due to an undiagnosed learning disability (dysgraphia) discovered mid High School. He was a videographer in Junior College and has credits in the film Mother’s Day with Hukup Indie film productions. Because Mike always wanted people to learn from his mistakes, he was very open about his intense and frequently debilitating anxiety issues. He would be the first to admit that he started self medicating with alcohol and drugs in his teenage years. That world eventually led him to start hitch-hiking back and forth across the United States for seven years until he landed in Dubois in August of 2018, with his trusted emotional support dog ‘Drifter’, who he rescued months earlier in New Mexico.

Mike would tell you that arriving in Dubois was his ‘rock bottom’ and he had prayed to God to put him where He wanted him to be and so his arrival here became one of his biggest blessings. He had no money or prospects but was eager to work and he was a hard worker. As is the custom during the Summer, Hikers and Bikers stay in the Community Room at St. Thomas Episcopal Church. The Church gave him work for a time and he began to believe his life could change and he just might stay in one place for awhile. Separate from the Church, a parishioner took an interest in helping Mike and learned he felt he may be dying from his alcohol abuse. Having stopped taking all hard drugs years before arriving in Dubois, he began his alcohol rehab journey. Although it was a two-year battle, this past April 15th, he received his one-year AA coin. He was rightfully proud he had made this milestone. However, April 15 in 2020 marked a dark single incident in his life: having never been in trouble with the law, and having been 7 and one half months sober at that time, he drank with a neighbor and the alcohol fueled evening of two supposedly recovering alcoholics ended with guns being drawn. Thanks to the professionalism of the Fremont County Deputies no one was hurt. But contrary to the newspaper reports, Mike never shot at law enforcement. The inaccurate articles haunted him to his end. Mike was appropriately arrested with his Jail experience being the ultimate wake up call. He requested baptism immediately after his release, which was performed by Pastor Gordon Lindley. Mike knew he needed to start over and as the Bible teaches, be born again and washed clean of his sins. He was on Probation at the time of his death.

Mike knew he was different, dressed different, always felt different than everyone else. And his anxiety kept him from much social interaction. Mike felt the stares and judgment of people most of his adult life. Having been homeless for a long time, he was used to being treated as less than human at times but he tried to focus on those that treated him with respect. For that he was always grateful. You honored his humanity. With assistance, he got a Tiny Home and worked construction with his AA Sponsor. During the Winters he started developing his creative and artistic abilities and made walking sticks, leather goods, jewelry, and decorated skulls. This past year he started perfecting his talent in making knives, having just completed his ‘craft’ shed, outfitted with a forge.

Throughout his time in Dubois, which he called “his home,” he was always helping others when he could—usually bartering rather than asking for money for anything. He was quick to give away what little he had if he felt someone needed something more than him.

Taken too soon, Mike leaves behind his Mom, who was his rock, his father Charles, a son Ethan (Texas) and daughter Autumn Sky (Georgia) who were his biggest blessings. And of course, his beloved dog ‘Drifter’, along with his cat Casper, who are devastated by his passing. Also missing him are his step-dad David Huxel, brother Rick Lott and sister Julia Lott, grandparents Woody and Judy Smithey, aunts Susan and Jane Lynch, and cousin Chris Ledesma.

Mike would want all who knew him to realize how much he appreciated your kind words of encouragement and your respect. Yes, he struggled in his life, spending it chasing that elusive ‘normal.’

Mike would also want you to know his dream was to create some way to help people in his same situation…In remembering Mike, we know it would make him smile, if the next time you saw a homeless person, someone with mental illness, or an alcohol or substance abuser—you didn’t ignore them, walk on the other side of the street or avoid eye contact—instead you would say, “how are you today? I wish you well on your journey.”

Mike also leaves behind his Dubois family: Mandy Rose, with a hole in her heart, who believed in him and God’s power to change and bring hope to her second son; Ken Nattell, who mentored him and encouraged his artistic crafts; Roche Lindsey, His AA Sponsor, employer and friend; Barbara Johnson, neighbor, surrogate grandmother and friend; and Pastor Gordon Lindley and Pat Moore, his Celebrate Recovery leaders; and Bob Baker, more than a landlord, offering grace.

And so many others in Dubois who befriended Mike and helped give him a life he never knew before. Mom, Stacy, wishes to thank all of you—God Bless You, from the bottom of her heart.

Dear sweet Mike, God has wiped away all tears from your eyes, and there shall be no more death, neither sorrow, nor crying, neither shall there be anymore pain, for the former things are passed away – Revelation 21:4

Meet you at the Rainbow Bridge, Drifter