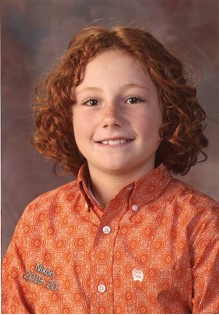 Guestbook 41
Funeral services for Nixon Finn David will be held at 2:00 pm on Thursday, July 1, 2021, at the Lander Community Center. Interment will follow at Mount Hope Cemetery. Nixon passed away on Tuesday, June 22, 2021.

Nixon Finn. If you asked him, he would tell you his parents picked him up at the gas station in Billings, Montana and that his mother was a lizard and his father was a truck driver…he loved to tell everyone this, including the cable TV guy! In all actuality, Nixon Finn David was born October 25, 2010 in Billings, Montana to Weston and Emily David. He was the final president to join the family. He joined his older siblings Lincoln, Madison, and Ford.

Nix attended Wind River Elementary where he was known for smuggling items, such as his lizard, to school. More than once, he snuck his beloved lizard into the classroom under his hat or tucked in his hoodie pocket. Nix loved school and his classmates. He always made sure no one was ever left out and that they knew they were loved….his plethora of girlfriends made this quite obvious. He befriended all staff members including his favorite custodian Ray and bus driver Mike. Some nights he would ride the full cycle of the bus route just so he could spend more time chatting with Mike.

Nix spent all of his time at “The Lizards” with his brother Ford and his cousin Zane. This was his fortress in the rocks behind his house. He spent hours there where he would find endless four-legged friends and a few slithery ones as well. You could also find Nix hunting frogs near his favorite fishing hole by his cabin in Dubois or down fishing the Sweetwater. Every catch was released because Nix didn’t believe in eating them, as they were his friends too. Nix joined his siblings in showing steers at the County Fair. His favorite steer, Fry, is still out in the pasture somewhere or so he was made to believe. He just couldn’t bear to part with any animal. Nix had the biggest heart and loved all creatures and wanted them all to live…. even the mouse he saved from his cat’s jaws. This all lead to his life-long dream of owning his own zoo with his best friend Rooster. The first member of his zoo was his bearded dragon Tim. Nixon had a plan for all creatures, either left them in his mother’s bed or in the homes he built for them.

Nix also had a love for his family history. Scotland was the home of his grandmother’s family. After doing family research in the 3rd grade, he learned more about his Scottish history, which lead him to his dream of playing the bagpipes. Nix started bagpipe lessons over a year ago with The Pipes and Drums of the Lander City Fire Department and his wonderful teacher, Melissa. He was looking forward to his debut in the Lander 4th of July Parade.

Nix had the most random love for things…..wearing only dress polos and jeans to school, old classic radios he would find in Grandma’s basement, a discman that was always playing Bon Jovi, drinking his morning coffee before he headed out for the school bus, using ranch or Chick-fil-A sauce, making Ramen noodles (day or night), telling inappropriate jokes, watching YouTube videos on the latest cleaning trends and having his sister buy his cleaning supplies, shooting his 17 or shotgun, researching plans to build his helicopter, building Legos and leaving pieces all over the house, kayaking at his “ocean,” talking nonstop whenever he was in the car, being a hopeless romantic with the world’s best dating advice to share, and kissing everyone good night.

Knowing Nixon, you would have known his crazy curly red hair, his current mullet that was inspired by his favorite “Mullet Man 1,” his sweet freckles, and his jelly rolls. His loving personality along with his stubbornness touched everyone in one way or another.

The next time you go fishing, hunt lizards, target shooting, drink a Red Bull or wear your favorite Polo, know Nixon is with you. May you all know how much he loved you and remember to love the way Nixon did.

Memorials may be made to Pavillion Fire Department or The Pipe and Drum of the Lander City Fire Department in care of Davis Funeral Home, 2203 West Main Street, Riverton, WY 82501.