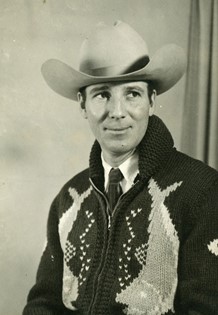 Guestbook 6
Marvin E. Thompson, 87, of Riverton, Wyoming passed away Saturday, June 26, 2021 at his home after a lengthy illness. Funeral services will be 2:00 p.m., Friday, July 2, 2021 at the Church of Jesus Christ of Latter-Day Saints. Military Honors will follow at Mountain View Cemetery.

Marvin Earl Thompson was born November 17, 1933 in Lander to William Lovercheck and Winifred Marie Winchester. He grew up at the family homestead of the Winchester Ranch at Diversion Dam graduating from Dubois High School. He attended the University of Wyoming and Colorado State University aspiring to be a veterinarian.

He served in the Army of the United States during the Korean War and was Honorably Discharged on November 30, 1962.

In 1960 Marvin decided to purchase his own property of 140 acres at Telegraph Creek, in northwestern, British Columbia after working at the Gange Ranch in British Columbia. In 1965 he returned to Wyoming where spent the remainder of his life working on ranches throughout Wyoming.

Marvin married Molly Malena Major. Together the couple had two sons, Mark and Will Thompson. The couple later divorced. On November 6, 1973 he married Athly Bodily. She had four children and the couple together had a daughter, Lorna Jean. Athly passed away May 6, 2015.

Marvin enjoyed attending his grandchildren’s activities, researching family history where he traced the Winchester lineage to the mid 1600’s. He was passionate about ranching, horses, cattle and was an active member of the Church of Jesus Christ of Latter-Day Saints where he held numerous callings.

He was preceded in death by his wife, Athly Bodily Thompson; daughters, Katherine Fitzsimonds Johnson and Alison Fitzsimonds Jahnke.