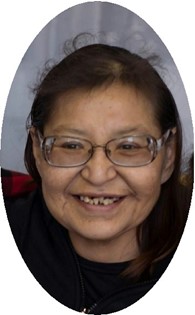 Guestbook 1
Funeral services for Josephine A. Spoonhunter, 54, will be held at 10:00 a.m., Thursday, July 8, 2021 at the Heritage Hall at the Fremont County Fairgrounds. Interment will follow at the Arapaho Catholic Cemetery. A Rosary will be recited at 7:00 p.m., Wednesday, July 7, 2021 at the Heritage Hall with a wake to follow at 1580 Redwood Dr., Apt. C in Riverton, WY.

She passed away on July 2, 2021 at the Wyoming Medical Center in Casper, Wyoming.

Josephine was born on March 16, 1967 in Riverton, Wyoming, daughter of Lawrence Littleshield and Sarah Spoonhunter. She spent most of her time living on the Wind River Reservation but spent some time in South Dakota.

She obtained her GED at CWC and also attended a year of college there as well. Josephine worked as a bus monitor and teacher’s aide in South Dakota for a couple of years and also at NADFS for a short period of time.