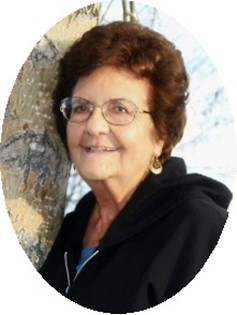 Frances Meredith was born December 23,1929 at Milford, near Lander, to Frank Sperry Meredith Sr. and Leah Nellie (Leseberg) Meredith. When she was one year old, the family moved to a ranch north of Fort Washakie where Frances completed eight years of education at the Countryman School. She graduated from Fremont County Vocational High School in Lander in 1947.

During the summer of 1946, Frances worked at the T-Cross Ranch above Dubois. She lived with her Grandmother while attending high school and working at Ben Franklin. After graduation she was employed by Central Trust at the Fremont County Courthouse.

Frances married her high school sweetheart, LeRoy "Glenn" Dooley, on October 7, 1948 in Lander. Glenn was serving in the US Navy at the time and she joined him in San Diego. Later they resided in Bremerton, WA where their first son, Mike, was born.

After Glenn's discharge from the Navy they lived in Lander, Riverton, Hudson, Casper, Shirley Basin, and the Gas Hills. The family moved to Riverton in 1969. Frances devoted most of her time to raising three children: Mike, Steve, and Linda. She also was employed at Lucky Mc Corporation, Datel, LRC, and Pathfinder Mines.

Frances had a love for researching genealogy and after retiring she spent many hours compiling several family books. After Glenn's retirement the couple enjoyed fishing at Jackson Lake as well as Bull Lake. She also organized her 40th, 50th, and 60th class reunions.

Frances loved to travel. She toured all 50 states as well as Canada and parts of Mexico. She and Glenn traveled throughout Europe, Scandinavia, Great Britain, Russia, China, Africa, South America, Australia and New Zealand. She also took a "solo" trip to Greece, Turkey, and Morocco.

Her husband, Glenn, preceded her in death in 2003 after 55 years of marriage. Frances was devoted to her family and enjoyed watching her grandchildren’s and great grandchildren's school sports, especially volleyball and basketball. She was a life-time member of the Fremont County Historical Society.

In lieu of flowers the family requests donations to Help For Health Hospice, Riverton Methodist Church, or the charity of their choice in care of the Davis Funeral Home, 2203 W. Main Street, Riverton, WY 82501.