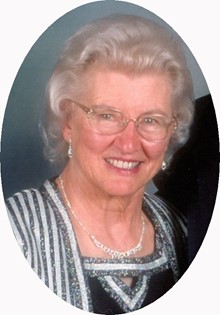 Guestbook 0
Mimi Corn was born on September 26th, 1931 in Cody, Wyoming to Alice Young Tourtellotte and Verle Tourtellotte. She grew up in Riverton, Wyoming and graduated from Riverton High School in 1950. She married Richard Ritter in April 1951 and moved to West Covina, California where they had two children, Allison and Paul. They later divorced.Mimi then married Richard (Dick) Corn in August, 1967, then they moved to Riverton, Wyoming in 1987. They were married for 50 years.

She was a bookkeeper and owned a beauty supply store in Temple City, California for many years.

She had 2 sisters, Shirley Powell who died in 2009 and Gail Carter who lives in St. George, Utah. Mimi is survived by her daughter, Allison Adams and husband, Dale of Riverton. Her son Paul Ritter from Temple, Texas. Granddaughters Tamara Lewis and husband Dennis, Denise May and husband, Ted. Four great grandchildren, Johnny Souza, Andrea Koester and husband Ryan, J.D. Manzanares and wife Baylee and Maycee Manzanares. Two great-great grandchildren Lucas and Emmi Koester, niece Sue Powell and nephews Carey and Steven Powell. Also, those she loved as her own, Donna Taylor, Karen Reid and Mark Lee.

Mimi was preceded in death by her husband Dick Corn, parents Verle and Alice Tourtellotte and sister Shirley Powell and nephew Tommy Otis. Mimi passed away in Riverton at the age of 89. Her favorite verses from the Bible were John 1: 1 – 3 and Psalm 91.

Service will be Friday at 2:00 pm at Lighthouse Bible Church

In lieu of flowers, memorials may be given to Gideon International in memory of Mimi Corn in care of Davis Funeral Home 2203 W. Main, Riverton, Wy. 82501