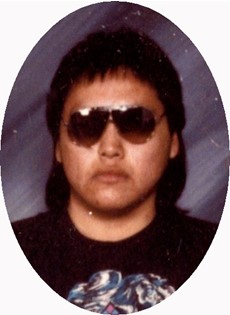 Guestbook 12
Funeral services for Joseph Blackburn, Jr., will be held at 10:00 a.m., Tuesday, July 27, 2021 at the family home 100 C’Hair Lane in Arapahoe, Wyoming. Interment will follow at the Blackman/Blackburn Cemetery. A Wake will be held Monday, July 26, 2021 also at the family home. Covid-19 guidelines will be followed by wearing masks and social distancing.

On December 25, 1969 a “Shining Star” was born to Joseph Thomas Blackburn Sr. and Lucy Mary Blackman/Blackburn in Riverton, Wyoming. Born on that Christmas Day in 1969 he truly was a gift. He was given the Indian name Noh’oesei’noo “Shining Star” by his Grandpa Seth Blackburn.

Joseph was baptized in the catholic church and an avid member in the Native American church and ceremonies. In his final days he enjoyed fellowship from the Church of Jesus Christ of Latter-day Saints in Riverton and Casper.

He graduated from Riverton High School in 1989. He then attended Haskell Indian College in Lawrence, KS. Joseph worked for the Wind River Casino, Shoshone and Arapaho Headstart and Wal-Mart. He enjoyed spending time with family and friends especially his granddaughter Keyah Garrett.