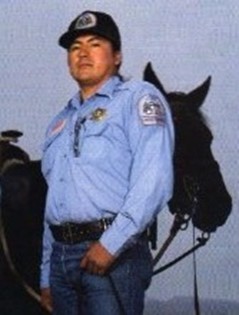 Guestbook 5
A celebration of life will be held for James Eldred “Gahsahnahvoo” Guina, 60, of Fort Washakie, Wyoming on August 12, 2021 at the Washakie Baptist Church on North Fork Road. Funeral procession will be led by the Spirit Riders. Services will be conducted by Pastor Wayne King starting at 11 am and will be followed by a feast and giveaway.

Jim was a lifelong resident of the Wind River Indian Reservation and was employed as a Custodian at Fort Washakie School until June of this year. Mr. Guina attended schools at Fort Washakie, WY; Flandreau, SD; and graduated from Wyoming Indian High School in 1980. After high school he married Elizabeth Trosper from which they had three children.

Jim was a man of many hats but one his greatest loves was always the mountains and the outdoors, where he spent countless hours enjoying them with his family that included his children, siblings, nephews and nieces. He would later enjoy taking his grandchildren fishing and swimming in the great outdoors.

Jim attended the Police Academy in 1986 and after graduating from federal officer’s training academy became a commissioned officer, a credential of which he was most proud. He worked as a game warden for the Shoshone and Arapaho Tribal Fish and Game for a number of years and was able to spend his professional career doing what he loved.

Jim was an avid billiards pool player and was rated as one of the top players in the state. He enjoyed pool nights with his son, Jarrod, and other league players and traveling throughout the state competing in tournaments. Another hobby he enjoyed as a young man was playing in summer softball leagues. He and his family were always busy every summer between practicing softball or fastpitch to participating in league and tournaments.

Jim was a man of many talents and one in particular was his carpenter ability which he used to build the Washakie Baptist Church on North Fork Road in Fort Washakie. He spent many hours with his grandsons building the church even after he became ill. Although he was baptised Episcopalian, he shared in the gospel of the Lord in many houses and will forever be missed by his fellow worshipers. Jim opened up his home to anyone and was the caretaker to his grandchildren. Everyone knew they had a place to stay or who to call when they needed someone to lean on. Grandpa, Uncle, Father, Brother, Friend, Son – Jim will forever be in the hearts of those who loved him.

Memorials may be made to Encompass Cares Hospice in care of the Davis Funeral Home, 2203 W. Main Street, Riverton, WY 82501.