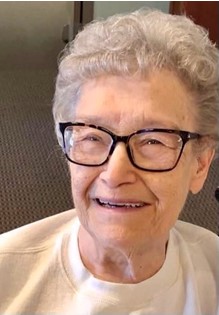 Guestbook 7
Elsie Lucille Snyder Bright, 86 of Riverton gained her angel wings and went home to her heavenly father on August 15, 2021 in Riverton. Memorial services will be held at 10:00 a.m. Friday, August 20, 2021 at the United Methodist Church in Riverton. Burial of her ashes will be held at Mountain View Cemetery at a later date.

Elsie was born January 24, 1935 to Granville P. and Ellen Lucille (Boyer) Bailey in Ogallala, Nebraska. She grew up in Thermopolis and graduated from there with the class of 1952. She worked as a bookkeeper in many different businesses.

She married Dennis W. Snyder on November 22, 1951 in Thermopolis, WY. Together they had, 2 daughters: Vickie Watkins, and Carol Strohecker; and 1 son: Dennis Syder Jr. and 4 grandchildren.

Elsie was blessed with a big loving family that she loved being around. Elsie loved doing small crafts, working on her computer, looking at Facebook, volunteering at church, and the VA Clinic, She spent time at the senior center and loved to dance. She was also a member of the Eagles and the Good Sams Club.

She was preceded in death by her parents, Granville P. and Ellen Lucille (Boyer) Bailey and husbands, Dennis Snyder and Leonard Bright.