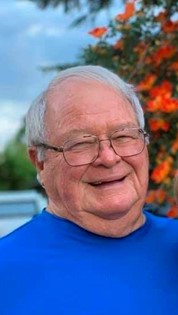 Guestbook 15
William Michael (Mike) Hughes passed away after about 8 months of health problems on Saturday, August 14, 2021, at the Help for Health Hospice Home in Riverton, WY.

Mike was born on April 15, 1948, in Torrington, WY to William Marley and Margaret Long Hughes. Mike spent his early life in Goshen County, WY. He attended schools in Torrington and Lingle/Ft. Laramie, where he was graduated in 1966. He was active in 4-H, livestock judging, FFA, Football, Wrestling and Track. He was also the school’s student body president during his senior year.

Following high school he was drafted into the US Army and served from 1967 to 1969. He then moved to Denver and went to Arapahoe Community College and worked.

In 1974 he married Gay Lynn Mers, who he had known since childhood, in Torrington, WY. They moved to Ft. Collins, CO where Mike attended CSU, majoring in wildlife biology and Gay taught school at Berthoud, CO. He was graduated from CSU in 1977. He worked in Wyoming for the Game and Fish for a short period of time, but returned to Colorado in the spring of 1978. Mike and Gay remained in Colorado until the summer of 1980 when they moved to Riverton where Mike worked in the fencing business and later the oil field. In 1988 he went to work at the acid plant, now Chemtrade Logistics, where he worked until his retirement in 2014.

The Hughes have one son, Drew (Marion and Leo) of Riverton.

Over the years the Hughes hosted a number of exchange students through the EF Exchange Program. They have kept track of most of them and visited many. The family travelled to Europe to visit in 1995 as well as 2001. In 2001 they attended the wedding of Miia Sippola and Petri Knuuttila in Finland. Even tho Drew was an only child he had the privilege of having many foreign siblings from age 5 onward. Following Mike and Gay’s retirement they travelled to Europe and visited 8 of them. Harald/Rehka Finger – Vienna, VA; Lina Maria Linge – Honefoss, Norway; Siv/Stig Brekke – Hovik, Norway; Mathilda Sernstad – Stockholm, Sweden; Miia/Petri Knuuttila – Tampere, Finland; Melina/Henry Kaihoniemi – Laihia, Finland; Bernhard Sarang – Innsbruck, Austria; and Bettina Neumayer – Schaffhausen, Switzerland. There are 9 foreign grandchildren from them. For years, their home has fondly been referred to as the “Hughes Hotel” as Gay’s parents, her brother, several nieces and Jesse Cornejo have lived with them.

Mike was an avid fisherman. He loved to tie flies, a skill he learned in 4-H, and taught himself how to tie salmon flies, most of which required 20+ hrs. each to tie. He never sold any of them, but delighted in giving them to special friends. Most of his family, and a few others, have a fishing pole made for them by Mike. He made spinning rods as well as fly rods. His nephew, also a Mike, has a fly rod made in BSU colors.

Another of his passions was cooking. The Food Network was one of his TV favorites. When the holidays arrived he was known for his wonderful baklava and peanut butter balls. Fortunately he taught Gay how to make baklava about a month ago. He took it to his Hughes family reunion to share with his relatives. Mike was loved by many and he loved sharing his cooking with others. The Hughes often hosted friends for dinner with Mike cooking up his latest concoction. His walleye was to die for.

Mike is survived by his wife of 47 years, Gay, of Riverton; son, Drew and family (Marion and Leo), also of Riverton. Siblings, Patty/Mark Lucht of Riverton; brother, Jim/Connie Hughes of Merrill, WI; sister, Becky of Edgewood, NM; brother and sister-in-law, Gary and Paula Mers of Spanaway, WA. Mike has two living Aunts, Violet Long of Independence, MO; Mary Hahn of Torrington, WY; an Uncle, Roy/Sharyn Hughes of Denton, TX. He also had numerous cousins as well as nieces and nephews.

Mike is preceded in death by his grandparents – Marley and Hallie Hughes and CR and Ethyl Gomez; parents – Bill Hughes and Margaret Bryson; his in-laws – Ed and Allene Mers; also 6 uncles and 3 aunts.

Due to the rise in Covid cases in the community, his celebration of life will be held at a later date. A private family service will be held at Davis Funeral Home. Cremation has taken place and his ashes will be scattered in the spring by family members.

In lieu of flowers, donations can be made in Mike’s memory thru the Davis Funeral Home to Riverton Medical District or the Help for Health Hospice Home.