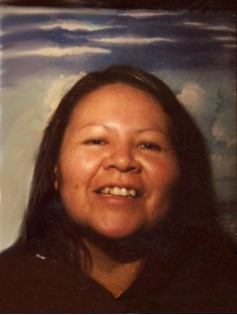 LaDonna Littleshield was born on April 10, 1967 in Riverton, WY to Richard James Littleshield, Jr. and Sarah Delores (Friday) Littleshield. She grew up in the St. Stephens’ area and attended schools there and Arapahoe. She graduated from Flandreau Indian School in South Dakota. She lived most of her live in the St. Stephen’s area.

LaDonna was baptized into the Catholic faith and was a very dedicated member of the St. Stephen’s Catholic Church and prayed daily.

She was a professional bead worker. She beaded moccasins, cradle boards, miniature cradle boards, purses and many other projects. In 2003 she was chosen the top Bead Worker by the Heard Museum, Santa Fe, and Plains Indian art market in Sioux Falls, Iowa. Every art show she entered she won Best of Show always doing traditional designs and colors. Besides enjoying beading she loved to watch basketball.