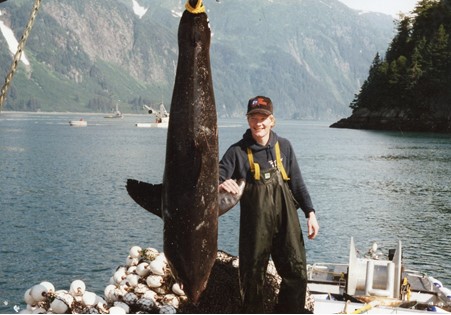 Ronald Brian Titterington was born May 16, 1969 in Fairbanks, Alaska to Ronald O. and Bonnie Lee (Rose) Titterington. Brian grew up in Cordova, Alaska and Dubois, Wyoming. He graduated from Dubois H.S. with class of 1987. He grew up helping his dad outfitting and wrangling.

Brian was a commercial fisherman out of Cordova, Alaska owning his own vessel and fished on the Saga in the Bearing Sea during the off season. He was a sought-after fisherman on many fishing vessels.

He had a passion for his commercial fishing, sport fishing, hunting, camp outs, and playing pinochle with his mother every morning. He was also a chess player and many other games. He was a character to be around and kept in good contact with his family and friends.

Brian was baptized in the Church of Jesus Christ of Latter-Day Saints. He loved his religion and loved his Lord whom he said was his best friend.

He is survived by his parents, Ronald and Bonnie Titterington; brother, Jesse Samuel “Sam” Titterington and his fiancé, Trish; Sam’s five children, Tawna, Stazi, Jesse M., Rowan, and Rheannon; sister, Shawna Kompkoff and her two children, Jesse B. and Kaysha.

Arrangements are under the direction of the Davis Funeral Home. On-line condolences may be left at TheDavisFuneralHome.com.