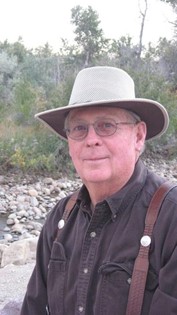 Guestbook 2
For those wanting to join the funeral service virtually:

At age 83, on a fall Sabbath morning, 19 September 2021, our noble and gentle father, Glen Williams, passed away at his home surrounded by family in Lander, Wyoming. His heritage in the Wind River Mountains area and Wyoming run deep where his grandfather Evan John Williams first came to the area in 1880’s. His grandfather and father both had homesteads near South Pass and at Elkhorn. His word was his bond, and he was exceptionally well liked by all who knew him in Fremont County. He had a well-developed sense of humor with a quick and easy laugh that put everyone at ease. He loved music and word play, could sing and narrate with skill, and had a tender heart with his emotions carried just beneath the surface for him being such a rugged outdoorsman. He was happiest in the mountains with his family hunting, fishing, and camping. As a man of few words, he was a good listener, gave wise advice, and let his actions carry the weight of his legacy. Glen Williams was a man of the highest moral character, and his life is a testament that serving and sacrificing for family is a noble calling.

Glen, as he was always called, was born on 9 January 1938 in Rock Springs, Wyoming, the third of eight siblings to Elizabeth Lindsay Williams and Hugh Callahan Williams. He also had five half-brothers and sisters from his father’s first marriage to Elsie Avery. He remembered fondly hunting and fishing with his father and spending summers with his Lindsay grandparents in Bennington, Idaho on their farm and not so fondly learning--against his wishes--to play the violin. He attended Yellowstone Grade School and graduated from Rock Springs High School in 1956. He met and later married the vivacious Carol Marie McNiven of Afton, Wyoming, on 11 October 1960. As husband and wife, they laid a strong foundation for the eleven children that would join their family, many of whom still reside in Lander and Riverton.

Glen held many occupations and physically worked hard all of his life to provide for his family. He worked at a sawmill with his brothers at Muddy Ridge near Prospect Mountain, for Wyoming Automotive in Rock Springs, and then for the Forest Service running pack string lines for bug spraying. He was drafted in the Army in September of 1961 and spent two years in the service but never left the US. He worked in the oil fields doing fracking and then moved to Lander with Zanetti Bus Lines as the manager in 1970. He drove a propane delivery truck for several companies, was the service foreman for Seamonds Equipment, ran Will’s Window and Floor Store in Lander, drove a semi filled with propane in the Big Horn mountains, helped run Louis Lake Lodge, and was contracted to work at the Pavilion Natural Gas Plant in charge of many huge compressors that pumped natural gas into the pipeline.

He was an active member of the Church of Jesus Christ of Latter-day Saints all of his life serving in numerous callings including as a scoutmaster, a deacons quorum advisor, a counselor in a bishopric with Frank Enos and Lane Perry, an elders quorum president, a high priests group leader, a financial clerk, a ward mission leader, and for many years as a stake missionary on the Wind River Reservation with his wife Carol where he actually grew to enjoy playing that violin later in life.

The funeral for Edward Glen Williams will be held on Saturday, September 25, 2021 at 10:00 a.m. in Lander, Wyoming in the Church of Jesus Christ of Latter-day Saints building at 653 Cascade Street followed by burial at Mount Hope Cemetery (805 Mount Hope Drive, Lander, Wyoming).

Immediately preceding the funeral, there will be a viewing from 8:30 a.m. to 9:40 a.m. in the same building as the funeral, 653 Cascade Street in Lander.

Services are under the direction of Davis Funeral Home in Riverton, Wyoming.