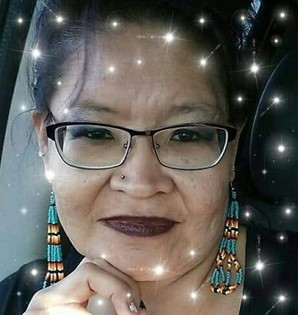 Guestbook 2
Debra Anne Bell was born on July 3rd, 1972 at Lander, Wy. and made her journey to the Spirit World in the early morning hours of Monday, September 13th, 2021 at Denver, Co.

A Celebration of Life and Feed in honor of Debra will be, Tuesday, September 21, 2021, 1:00 p.m. at the Fremont Center of the Fremont County Fairgrounds in Riverton. All precaution of Covid-19 are being requested by the family.

She was a fancy shawl championship dancer during her younger years into her teens and won at many pow-wows. Schools she attended were at Wyoming Indian Elementary where she was a basketball cheerleader and when the first Wolf Dancers dance club formed she was named the first Princess. She graduated 8th grade at Pine Ridge Elementary in South Dakota. She also attended Lander Valley High School as a freshman joining the R.O.T.C. as a cadet. Debra also went to Flandreau High School in So. Dakota. She continued her education earning various nursing certifications in Wy, So. Dakota and Colorado where she became a Caretaker RN. She worked as a caretaker at many nursing homes in Wy. and Colorado where she was certified to dispense and administer medicine.

During her younger years into her early teens Debra loved playing basketball and won a few independent championships earning All-Tourney awards. She learned to sew and became a Princess Star Quilt maker taught to her by her grandmother Joyce Bell. Debra also made grass dance regalias for young boys. She also designed and made fancy-dance shawls, dresses for young girls. Debra became a great cook and she was always asked to cook at many family gatherings, and other functions. She once worked at an oil rig cooking for over hundreds of workers. Debra is a very avid Denver Broncos fan always cheering for her team.