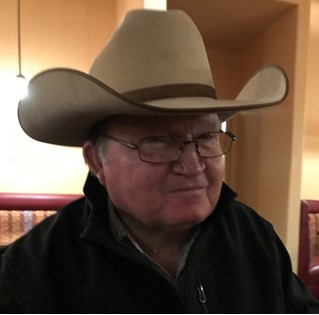 He began his schooling at Crowheart School and graduated from Morton High School in 1967. He participated in football, basketball, and track throughout his high school years. Cowboying was what he loved. He believed in honest and fair dealings in everything he did. He began his career working at Bear Creek Ranch and the Double Diamond. On one of the luckiest days of his life, which was the 14th of January 1972 he married Wanda (Aragon) and later that year had his daughter Denise. He then went to work at Big Sandy Grazing Association and then for Jim Barquin prior to having his son Eric. In 1977, he and his wife began working their own ranch at the base of the Owl Creek Mountains. Along the way he basically adopted 4 more kids, Justin (Red) LaJeuness, Tom Miller, Dewayne and James Aragon. He also supported his numerous nieces, nephews, and grandchildren in their numerous activities. He never met a horse or a kid he didn’t like. He loved the simple cowboy lifestyle until he moved along. We will miss his guidance and acts of kindness.

On-line condolences may be made to the family at www.TheDavisFuneralHome.com. Services are under the direction of Davis Funeral Home in Riverton, Wyoming.