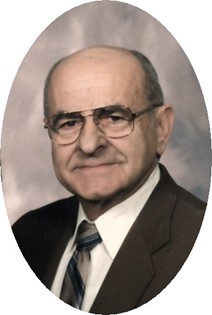 Guestbook 7
Pius C. Mathern, 93, of Riverton passed away on Saturday, September 25, 2021, at the Wyoming Medical Center in Casper, WY. A mass of Christian burial will be held at 1:00 pm on Saturday, October 2, 2021, at St. Margaret’s Catholic Church. Inurnment will follow at Mountain View Cemetery with military honors.

Pius Cecilius Mathern was born on December 3, 1927 in Ingomar, MT to Cecilius and Katherine (Kuntz) Mathern. He grew up in Ingomar with his nine siblings, he was the second to the youngest.

He was baptized into the Catholic faith and was a member of St. Margaret’s Catholic Church. He had served as a lay reader and a Eucharist minister also an usher for many years.

Pius enlisted in the U.S. Army on November 3, 1950. He served with the 4th Infantry Division 160th Regiment 1st Battalion A CO. He saw combat in Korea and was honorably discharged on October 4, 1952.

On January 23, 1953 he married the love of his life, Dorothy Emma Marie Worf in Billings, MT. Together they raised four children, Kenneth, Shirley, Robert, and Penny. The family lived in Billings, MT, Powell, WY, Cody, WY and finally Riverton, WY where he lived the rest of his life.

Pius worked as a milk man for Morning Star Dairy and Cream O’Weber Dairy. He started out as a bulk truck driver, picking up milk from farmers to transport to the dairy. He then delivered house to house, in the early mornings. He then delivered to the schools and grocery stores. He was known as “the whistling milk man around town”, as he delivered milk to the stores. He retired in 1993.

He enjoyed playing his accordions, Polka music, (he played polka parties with two of his brothers, Daniel and Frank), traveling to Alaska and Canada, taking to the mountains in their 5th wheel, going to family reunions. He was an excellent cook making his German Kuchan, and he loved being with his family and all his grandchildren and great grandchildren.

He was preceded in death by his wife, Dorothy Mathern on April 7, 2014; his son Kenneth Mathern; his parents, Cecilius and Katherine Mathern; his siblings, Anna, Joseph, Mary, Rose, Emma, John, Daniel Frank, and Eva.