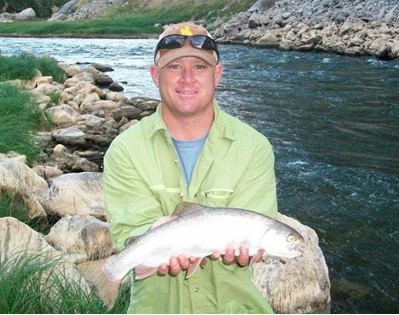 Guestbook 12
Jason H. Anderson, 48, of Riverton, Wyoming passed away on Tuesday, October 12, 2021 at the Wyoming Medical Center in Casper, Wyoming. A memorial service in his honor will be 3:30 p.m., Monday, October 18, 2021 at the Fremont Center of the Fairgrounds. A reception will be held immediately following the service at the same location. Guests are invited to stay for a reception and visit with the family and share stories.

Jason Henry Anderson was born to Jay H. and Loy Lynn (Christensen) Anderson in Syracuse, New York on December 3, 1972. Jason grew up near Peetz, Colorado on the family farm that was homesteaded by his great grandparents, Joseph and Ida Hundrup. The years Jason spent on the farm, “Homestead Ridge,” gave him the lifelong inspiration and desire to be in the country, ultimately leading to his career in Crop Advising for Big Horn Coop. The farm was an important place in his life where he spent valuable time with his family.

He moved to Sierra Vista, Arizona attended middle school and graduated from Buena High School in 1991. He also attended Cochise Jr. College in Sierra Vista. He then worked two summer seasons with Montana Rail Link under the tutelage of his Uncle Pete Christensen. In 1998 he moved to Cody, Wyoming where he started his career with Bighorn Coop in Basin, Wyoming, later transferring to Riverton where he was a crop advisor.

On August 8, 2008 he married Tessa Kay Clark in Lander, Wyoming. The couple had three children, Jordyn, Jack, and Josie.

Jason had many hobbies and passions. He loved fly fishing, jeeping, camping, being in the mountains, and boating at the lake. He was a huge supporter of his kids’ sports including hockey and soccer. He was a Riverton River Rats hockey coach for many years for various age groups. Jason enjoyed his family time and was passionate about working in his yard.

Jason, save a spot for us at your favorite fishing hole in heaven.

Funding to assist the family in their loss can be done at: https://gofund.me/c068295b