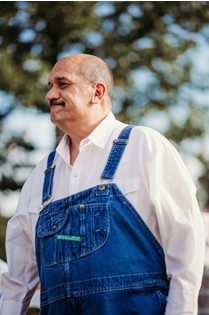 Rudy Paul Sanchez was born in Webb City, Missouri on September 9th, 1964 to Rudy and Louise Sanchez of Oronogo, Missouri.

He played many sports but his passion for basketball was evident. He impacted many thru the game over his lifetime. Rudy was called into the ministry at the young age of 17. He pioneered 3 ministries throughout his tenure. Those include Christian Center, Full Faith and Mountain Grace. He was loved by many, and his legacy will live on thru these works.

Rudy met his sweetheart, Kimberly Kay Olson at a church camp in Wyandotte, Oklahoma. They were married on August 31, 1985, in Bentonville, Arkansas. Life took them thru many adventures and brought them 9 children and 9 grandchildren.

He is preceded in death by: His Maternal Grandparents Paul and Hazel Berry; His Paternal Grandma: Sarah Monjes; His Mother in Law: Louise Olson