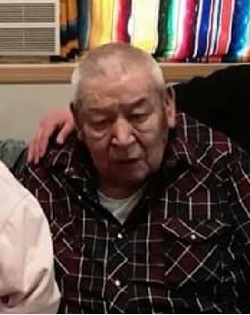 Leo Wesley Monroe was born on January 25, 1944 in Fort Washakie, WY to Leo Head Monroe and Mary Eliza (Shoulderblade) Monroe. He lived in the Ethete area most of his life.

Leo was a member of the Native American Church.

At the age of 18 he left high school when he was drafted into the U. S. Army and was sent to Vietnam to fight in the war. He later earned his G.E.D. Leo served from April 29, 1965 until May 7, 1968 when he was honorably discharged and returned to Wyoming.

He was a member of the American Legion in various posts.

He worked as a construction work in many different places.

Leo enjoyed hunting, fishing, going to the Casino, and the Raiders Football Team. He loved spending time with his grandchildren and singing to them especially when they were a new born.