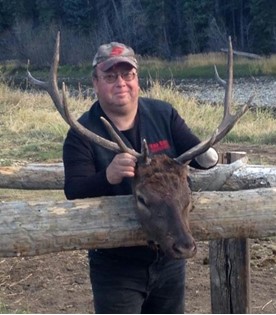 Guestbook 10
A Celebration for the life (open house) of Richard “Rick” D. Simcox, 55, will be held from 2:00 p.m. until 4:00 p.m. at the Reach Clubhouse in Riverton, Wyoming on Saturday, October 30, 2021. Cremation has taken place under the direction of Davis Funeral Home and Crematory.

Mr. Simcox passed away on October 23, 2021 at the Wyoming Medical Center in Casper, Wyoming.

Rick moved to Riverton in 2006. At which time, he began working for Fremont Motors and then First Choice Ford in Rock Springs, Wy. In 2011, Rick proudly opened up Wind River Auto and Diesel.

Mr. Simcox was baptized into the Baptist faith. He enjoyed hunting and sports shooting as well as acquiring many specialty firearms. He also admired Harley Davidsons and Ford Mustangs. He refused to grow up so time with his grandchildren was a great highlight for him. Accomplished bucket list items: Visiting Alaska, Traveling to visit friends throughout the country, taking his jeep out exploring, pack in hunting trip for elk just to name a few.