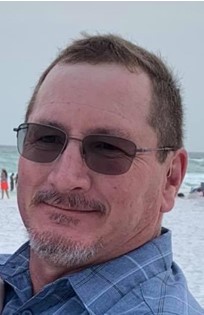 Guestbook 30
Rodney Lee Mosbrucker passed away October 26, 2021. He was born September 15, 1961 in Lemmon, South Dakota to Victor and Donna (Bolte) Mosbrucker. He grew up alongside his two younger sisters Sherry (Holt) and Lori (Gabrielsen), and moved to Riverton, Wyoming when he was five years old. If you ask his sisters about life growing up with Rod, they are quick to mention he was a typical older brother who told them they were adopted or that they came from across the river. Beyond the usual sibling bickering, there was no shortage of laughs and life lessons learned.

A celebration of life will be held in honor of Rod on Thursday, November 4, 2021 at 2:00 pm at the Fremont Center. Memorials can be made to the “Tough Enough Cancer Fund” of Fremont County in care of the Davis Funeral Home, 2203 W. Main Street, Riverton, WY 82501.

Rod attended and graduated from Riverton High School in 1979. Looking back at his high school days, the highlight of this chapter of his life was a last minute third-and-fourth-wheel blind date, where he met his high school sweetheart, Sharon. Even if their first date wasn’t an ideal situation, they soon became inseparable. Upon graduating high school, Rod attended North West Wyoming Community College on a wrestling scholarship. He spent one year attending school in Powell but found himself speeding home every weekend he wasn’t wrestling to see his better half. These repeated trips lead to his decision to transfer to Central Wyoming College for his second year of college to be back in the same town with Sharon. He graduated from CWC with an Associate’s Degree of Agribusiness.

Rod married the love of his life on June 6, 1981 in Riverton, Wyoming, where they created a family of their own. They welcomed their eldest son, Ryan, in 1983. Their second son, Bret, was born in 1986 and they completed their family in 1989 with their daughter, Jamie. Anyone that had the blessing of crossing paths with Rod knew that his family was his proudest accomplishment. Rod could often be found coaching little league or Babe Ruth baseball with the boys or watching dance recitals or soccer games to cheer on his little girl. As life carried on and he welcomed seven grandchildren into his life, he took on the proud role of “Papa.” He continued to cheer from the side-lines as the grandkids played sports, was the best nap partner with the littler ones, or could often be found wrestling on the floor making his favorite kids giggle.

Beyond his family life, Rod was always dedicated to his work. His work life started at the Riverton Creamery working for his in-laws. He then spent a long career at Meadow Gold Dairies as branch manager. He always planned on retiring from this position but unfortunately due to corporate changes that life plan changed, which lead him on a very different career route at the Wyoming Honor Farm. Rod took on this new job role with his typical commitment and determination, which allowed him to be promoted from a corrections officer to sergeant. He retired from the Wyoming Honor Farm after six years of service in August 2021.

Following in his father’s foot-steps he joined the Riverton Volunteer Fire Department. He was a member of the fire department for a total of 22 years. During this time, he held several positions, including chief. These years of service lead to a “brotherhood” that he was proud to be a part of.

To sum up, in text, the life that Rod lived is almost impossible. He was never short of true grit and strength throughout his life but especially over the past 18 years as he battled cancer. He never complained about the cards he was dealt but everyone witnessed him fight with his heart to be able to spend more time with his family and friends. Even when he was making medical trips to Salt Lake with his wife, which he fondly nicknamed “CEO,” he found time to enjoy the beauty in life. Even if it included spending hours in the car while the CEO perused every quilt shop found on the route. His time spent in the car was always rewarded with his famous check-in at The Cheesecake Factory. He enjoyed spending time in the outdoors of Wyoming, including camping, riding side-by-sides, hunting, and riding snowmobiles. He also enjoyed spending time at the Fremont County Fair. He spent years with his kids showing pigs; the finale at the end of the week -- the demolition derby (participating in the early years and helping his sons in the pit later on) -- was the highlight. When Rod wasn’t outdoors he could be found watching (or sleeping to) NASCAR on Sundays.

He was preceded in death by his grandparents, Frank and Celestine Mosbrucker, Howard and Winifred Bolte, and his brother-in-law, Mike Woodward.