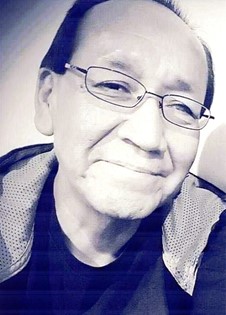 Guestbook 2
Funeral services for Byron Dean Lincoln, 56, will be held at 2:00 p.m., Tuesday, November 2, 2021 at the Fremont Center, Fremont County Fairgrounds. Interment will follow at the Arapaho Catholic Cemetery. A wake will be held on Monday, November 1, 2021 at 7:00 p.m., at 43 Oberg Lane, Riverton, Wy.

He was born on September 20, 1965, son of Leroy and Pauline (Little) Lincoln in Riverton, Wyoming. Byron graduated from Wyoming Indian High School before attending a year of college.

Mr. Lincoln enjoyed running and basketball but most of all, he loved his music. He served as a firefighter for ShoRap as well as worked as a carpenter. Byron lived his life to his satisfaction, setting his mind to not thinking he was getting old. He was always young and unstoppable. His humor was one of a kind. He did have a stubborn side yet had the kindest soul. Byron had the best advice, the best stories and the best life experiences to share. He loved his four grandchildren, Kadin, Keira Lincoln and Jaya and Tyrell Underwood, Jr. He enjoyed their company so much. He loved his son so much that he was the happiest of all. When he would visit or enjoy phone calls. He had numerous brothers that would stop by to visit. He was labeled as “Pops” to everyone that came by to check on him and visit. Byron was just a loving soul that was ever crossed his path. They ended up having a connection with him. He just had a gift to leave a good part in their hearts.

Services are under the direction of Davis Funeral Home. On-line condolences may be made to the family at www.TheDavisFuneralHome.com