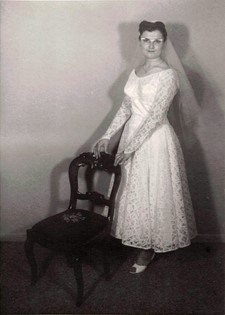 Guestbook 3
Donna Ann Hunter passed away peacefully, of complications from COVID 19, on October 24, 2021, at Riverton Sage West Health Care with her son, Nick, by her side.

A funeral service will be held on November 20, 2021 at 10:00 a.m. in the LDS Stake Center, at 430 Elizabeth Drive, in Riverton, Wyoming. Family and friend visitation will be from 9:00-9:45 a.m. that morning. A family graveside service will be conducted following the funeral.

Born to Donald W. and Lily L. Hillman Nicholas on September 7,1936 in Lebanon, Oregon, Donna was their oldest child and the only daughter. She had two younger brothers, James (Jim) and William (Nick) Nicholas.

In 1955, shortly after graduating from high school, Donna received a scholarship to go to the Eugene Beauty College. She graduated in 1956 with a license to practice cosmetology.

While attending college, one of her instructors took a particular interest in Donna. The instructor also had a son of Donna’s same age (who went by the name of Dick) that she encouraged to attend a social at the school. While at the social, Dick and Donna met and, soon after, her instructor became her mother–in–law.

Jay Richard Hunter and Donna Ann Nicholas were married in Eugene, Oregon on December 7, 1957. Their marriage was later solemnized in the LDS Idaho Falls Temple on December 4, 1982.

After their marriage, they moved from Eugene, Oregon to Riverton, Wyoming, arriving on Memorial Day weekend 1959. In Riverton, Dick joined his father in a local office machine business named “Hunter the Typewriter Man” (later renamed “Hunter’s Office Machines”). While raising their five children Donna also worked outside the home. She worked at several beauty shops including a small salon in the Fremont Manor Nursing Home. As the customers she knew as friends passed away at the Nursing Home, she often volunteered to help at the mortuary and attend to their hair for the last time.

Years later, when Dick took over the office machine business, Donna stopped working in the beauty shops and worked with him, also adding a line of religious books to sell in the store.

In the late 80’s, following a downturn in the local economy, Donna looked for other employment and found a job at Smith’s as a checker. She felt that job was created just for her. She enjoyed greeting, getting to know, and serving her customers for the next 18 years. Many people would wait in line, just to go through her check stand to be welcomed by and to visit briefly with her. She treated everyone with genuine interest, warmth, and respect.

Both Dick and Donna were active members of the Church of Jesus Christ of Latter-day Saints. They were also active in the Meadow Lark Good Sam’s club where they both served in various positions. They loved their associations with friends, both old and new, from throughout the state who shared their love for the outdoors.

Donna also served as a greeter at the Riverton Senior Center during lunch time, three times a week. She felt it was a way to keep in contact with many of the people she no longer got to see at the grocery store.

Donna is survived by her 5 children, Keith (Lauri) Hunter, Cindy (David) Speters, Anne (Robert) LaRochelle, Bryce (Annalece’) Hunter and Nick Hunter; 15 grandchildren and 14 great-grandchildren; as well as her brother James Nicholas in Oregon. She is preceded in death by her husband, parents, her brother, and an infant granddaughter.