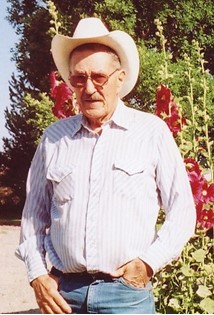 Guestbook 3
Allen Taylor, 89, of Riverton passed away at the Help for Health Hospice Home in Riverton on Monday, November 8, 2021. According to his wishes he has been cremated and there will be no services.

Allen Russel Taylor was born on March 22, 1932 in Browns Park, UT to Jesse G. and Mattie M. (Callaway) Taylor. He grew up in Browns Park with his three brothers and one sister. He attended school in Rock Springs, WY and graduated from Rock Springs High School.

On December 20, 1950 he married Martha Francis Graham. Together they raised two children, Linda and Doug. They would have celebrated 71 years together this December.

He lived in Rock Springs, Dubois, and Meeteetse before moving to Riverton in 1974 where he made it his forever home.

Allen was a heavy equipment operator by trade, working for most major road and oilfield construction companies in Wyoming and Utah but he also was a rancher. He was a terrific silver smith making many different things but his specialty was spurs and bits. Allen’s work was requested by many ranchers, horsemen, rodeo contestants and Marlboro Tobacco Company. He was interviewed, his work photographed and published in a book showcasing new artists. His work was auctioned for numerous causes in Wyoming.

He loved to take photos, was a talented drawer, started with leather work then played with silver becoming a silver smith. He played the guitar and fiddle, entertaining family and friends. Allen was so busy all the time doing many different things, he was a well-rounded man.

He is survived by his wife, Francis Taylor; daughter, Linda Wright and her husband, Mike, of New Mexico; son Doug Taylor of Riverton; grandchildren, Shawn, Shalaina, Tyler, and Sharolyn; eight great grandchildren; brother, Orville Taylor and his wife, Linda, of Comfort, TX; sister, Mary Baker of Craig, CO; many nieces and nephews who wanted to be “just like” some aspect of their uncle; and close friends, Sandy and Tom Johnson, their son Travis, and Michael and Diane Kouris.

He was preceded in death by his parents, Jesse and Mattie Taylor; and two brothers, Claude Taylor and Roy Taylor.