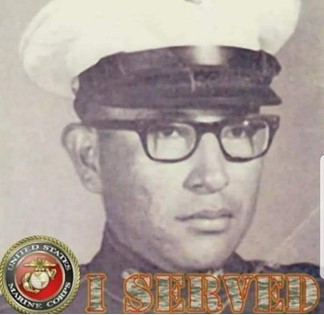 Guestbook 4
Traditional Native American Funeral services for Daniel Joseph Oldman, Jr., 72, will be held at 10:00 a.m., Saturday, November 13, 2021 at the Arapaho School Gymnasium. Military graveside services will follow at the Oldman Cemetery on Left Hand Ditch Rd. A Wake will begin at 6:00 p.m., Friday, November 13, 2021 at the Arapaho School Gymnasium with a wake to follow at the family home 413 Blue Sky Hwy.

Mr. Oldman passed away on Tuesday, November 9, 2021 at the Wyoming Medical Center in Casper, Wyoming.

Daniel was born on July 28, 1949, son of Daniel Joseph Oldman, Sr. and Frances Esther (Headley) Oldman in at the Arapahoe Clinic in Arapahoe, Wyoming. He lived in numerous places, deployed to other reservations like Crow, Lamedeer, and Pineridge but lived most of his life on the Wind River. Daniel graduated from Riverton High School as Wolverine, before enlisting in the United States Marine Corps (Sept.1969-June 1975) receiving the National Defense Service Medal (1972). Daniel attended United Tribes Technical attaining his Criminal Justice Certificate (1976), and attended Police Academy in New Mexico. He served as BIA Police Officer for 27 yrs. He also dedicated his life to being D.A.R.E Officer, Director of Boys & Girls Club of Arapahoe, Security Guard at St. Labre School, and he was also the Surveillance Manager at Wind River Casino then retired. Daniel had deep devotion to horsemanship/cattle, to writing, watching t.v., his favorite NFL team Miami Dolphins, spending time with all his grandchildren, also loved to fish, partake in sweats, & NAC. Daniel was dedicated to having an open gym, and mentoring youngsters of all ages. His granddaughter RaShawn gave him the nickname, we all grew to know him by "Pukkah." His Arapaho name is "Circling Eagle," he took pride in raising his granddaughter Magpie P. Oldman.