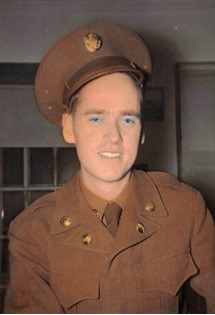 Curtis Edwin Godfrey was born on April 19, 1927, in Lemons, Missouri to Oren P. and Mary Melissa (Schnelle) Godfrey. He grew up in Missouri and attended public schools there until 8th grade with his four older sisters.

December 6, 1950, he enlisted in the U.S. Army and served until he was Honorably Discharged on November 29, 1952. He served with the U.S. Army 2nd Special Engineer Brigade. He was proud to serve his country during the Korean War and did three tours of duty. He had tried to enlist and serve in WWII but he was the only son in the family and his father had passed when he was young, so the Armed Forces denied him entry.

On June 9, 1959, in Laramie, WY he was married by the Justice of Peace to Ethel May Wilson, they celebrated their 62nd wedding anniversary this last June. Together they raised six children, two boys and four girls.

Curtis worked on the family farm in Missouri, after his military service he worked on a dude ranch in Cody, WY; was a ranch hand in Laramie, WY; a prison guard at the Wyoming State Petitionary in Rawlins as a Guard, WY, worked at the Wyoming Highway Department in Rawlins before moving to Riverton in 1967 to work as an explosives hauler for Brogan Miller and then a Heavy Equipment Operator for the Lucky Mac Mine in Riverton until his retirement. After retirement to keep himself busy he delivered mail and worked on the reclamation project at Susquehanna.

He was a member of the Veterans of Foreign Wars and the American Legion.

Curtis enjoyed playing cards, dancing, and spending time with his grandchildren. He loved socializing in the community and could be seen wearing a hat the said “Smile it doesn’t cost a thing” it was his motto.