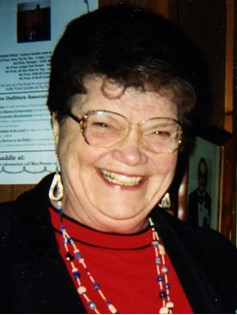 Guestbook 5
Inez Elaine Brandt passed away on Saturday, November 20, 2021 at the Help for Health Hospice home in Riverton. She was 85 years old. She was born January 1, 1936 in Monona County, Iowa to Holger and Lillie (Franks) Poulsen.

Graveside services will be held later; cremation has taken place. Inez spent her younger years at the Dunoir Tie Camp on Union Pass, where her family located in 1938. When she entered first grade the family moved to Dubois where she completed her education, graduating as salutatorian from Dubois High School in 1953. Her education interrupted until 1986 when she enrolled and graduated from Central Wyoming College in Riverton, Wyoming in 1990 along with her youngest daughter, Donna Akins Appel.

She married Joe R. Atkins in 1961 in Green River, Wyoming. The lived in Lander where Sheila Carol Akins and Barry Clark Akins were born. They located to the West Coast in 1964, living in Alameda, California where Donna Jo Ann Akins was born.

Inez and Joe later divorced, and she and the children moved to Anchorage, Alaska in 1970. In Anchorage she was employed at the Anchorage Westward Hotel and the Outrigger Polynesian Restaurant. She married Jerry Brandt in Girdwood, Alaska in 1976, where the couple owned and operated the Double Musky In in Girdwood. They later divorced and Inez and family returned to Wyoming where she live in Dubois and Riverton.

While attending Central Wyoming College in Riverton she was employed at The Sundowner Station, The Riverton Ranger, and CWC. She later owned and operated the Dubois Drug Store and was employed several years as Director of The Dubois Chamber of Commerce and was office manager for Jeffie Riley Real Estate for six years. She retired in 2013, and later that year she returned to work at the Warm Valley Lodge Assisted Living Center in Dubois. In 2015 she worked at the Dubois Museum until 2021. She remained a volunteer there until her death. She also worked for J & M Mountain Services part time.

She as active in the Dubois High School Alumni All Years Reunion, collaborating with the committee several years. She attended most of The Dubois Rams ball games and activities, supporting her children and grandchildren as well as her two cousin’s families. She was a Wyoming Cowboy fan along with the Buffalo Bills and Oakland (later Las Vegas) Raiders. She loved and promoted Dubois, and Wind River Country.

On November 14, 2021 Inez accepted the gift of salvation and received Jesus, in her heart, as her Lord and Savior.

Donations in her memory can be made to the Dubois Fire Department, The High-Country Senior Center, or the Dubois Museum.