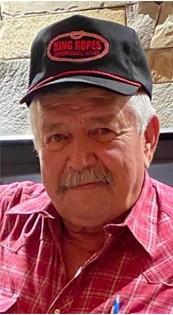 Earl David Walters was born March 26, 1957 in Lander, Wyoming to Clarence Joel Walters and Eloisa (Perea) Walters. He grew up in Crowheart for a few years and moved to Riverton where he attended school and lived the majority of his life on Two Valley Road.

Growing up Dave just wanted to be a Cowboy working at several ranches including the Double Diamond and the Matador Ranches.

He worked for L&L production, Hackleman Farms on Riverview, manager of Totem Construction Company, and in 1989 started with Midvale Irrigation retiring in 2020 as a Heavy Equipment Operator.

Early in life he loved snowmobiling, camping, fishing with annual 4th of July trips to Limestone Mountain. The family still continued enjoying camping every summer with an annual spring Yellowstone Trip over his grandson Kanin’s birthday. He was his grandson’s fan going to everything he did including, basketball games, horse shows, rodeos, and 4H. He always wanted a granddaughter, and was blessed when Klea Dawn was born in 2018 finally getting his little girl. He especially loved helping his friends cowboying, farming and ranching. Dave was a workaholic loving what he was doing. He loved playing games cribbage, aggravation, progressive rummy, and dice. Dave and Debi played cribbage almost every morning during the winter months. The loser fixed breakfast or did the chores.

Dave was described by friends as the best equipment operator taking extreme pride in his work. He took his vacation time to help the Weliever and the Pince families haul beets. Dave was successful and satisfied with his life and never wanted for more. He loved where he lived with all the beautiful surroundings. He loved Fremont county from the Mountains of Dubois to the beauty of South Pass and everything in between.

Memorials may be made to the Riverton Fire Department or Donor’s Choice in care of the Davis Funeral Home, 2203 W. Main Street, Riverton, WY 82501.