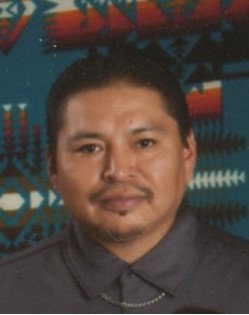 Guestbook 2
Jerome H. Warren, 46, of the Wind River Reservation passed away on Friday, December 31, 2021. A rosary will be held at 7:00 pm on Friday, January 7, 2022, at the Fremont Center at the Fairgrounds followed by the wake at his mother’s home, 334 Great Plains Road. The funeral will be at 1:00 pm on Saturday, January 8, 2022, at St. Margaret’s Catholic Church with burial to follow at the Arapaho Catholic Cemetery.

Jerome H, Warren was born to Pauline Warren Polen on April 18, 1975. He was a world traveler when he was young, his parents where in the U.S. Army. He lived in Germany including, Lcehiem, Phuf-stadt-Wiederstadt and Darmsstatd; Denver, Ronan, MT, Hamilton Dome and Arapaho Ranch.

Jerome was baptized into the Catholic Faith and also participated in Native American Ceremonies.

His hobbies were mechanics, learning to play the guitar and drums.