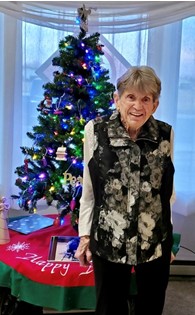 
A Memorial Service for Roberta Imogene “Imy” Eager, 90, who passed away peacefully at the Help for Health Hospice Home on January 13, 2022, will be held at a later date. A Memorial Service will be Saturday, July 2, 2022, 2:00 p.m. at the Davis Funeral Home in Riverton.

Imy was born on October 10, 1931, daughter to W. Roy and Zela M. (Blalock) DeSpain in Cougar, Oklahoma. She was one of seven children.

Imy met the love of her life, James Edward Eager, in Hinton, Oklahoma and were married on May 20, 1951. Married for 64 years, together they raised four children who were born in Oklahoma, Kansas and Colorado.

As a young loving mother, Imy worked long hard hours picking cotton in Oklahoma to help support her family and help Jim pursue his teaching degree. After raising her 4 children, Imy began her second career when she began working in schools in 1970. Imy received her teaching degree in 1976, the same time her son graduated, both at the University of Wyoming. Imy began her teaching career at Arapahoe School where she taught for some 12 years. Imy loved each of her students as much as they loved her. After retiring from teaching, Imy and Jim embarked on a new career together. They started their award making business, Sports Enterprise, in Laramie which they operated until they sold it in 1992. Imy and Jim then became snowbirds living in Yuma, AZ during the winter months and Riverton during the summer months before finally settling in Riverton year-round.

She is preceded in death by her loving husband, Jim; parents Roy and Zela DeSpain; sisters, Wanda Brogden and Geraldine Dodson and brothers, Dub DeSpain, Marvin DeSpain and Donald DeSpain.

Memorial Contributions to the Help for Health Hospice Home in care of Davis Funeral Home will be greatly appreciated.