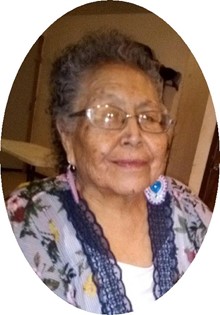 Guestbook 1
Funeral services for Anita M. Carrier, 70, will be held at 10:00 a.m., Saturday, January 29, 2022 at the Fremont Center, Fremont County Fairgrounds. Interment will follow at Friday Cemetery. There will be a prayer service at 7:00 p.m., Friday, January 28, 2022 at Davis Funeral Home followed by a wake at 359 Ethete Road. Anita passed away peacefully on Monday, January 24, 2022 at her home in Ethete, Wyoming surrounded by her loving family.

Anita was born on July 13, 1951, daughter of Moses Paul Moss, Sr. and Wyoma (Bitner) Moss in Lander, Wyoming. She was a lifelong resident of the Wind River Reservation. After obtaining her G.E.D. with her sister, Susanna Oldman, she met and married Norcees Carrier, Sr. in 1976 and later divorced in 1990. Before retiring to take care of her dad, Anita worked as a CNA at Westward Heights Care Center. Anita was ordained as a minister to pastor the Pentecostal Revival Center in 1981. Our mom loved to share the gospel and preached to many over the years. She also loved to share her testimony of how her life was full of constant drunkenness and hopelessness. Late one night in 1980, after a night of partying, she woke up and called the Assembly of God minister and wanted to make Jesus her Lord and Savior. From then on, she devoted her life to him and brought her children and grandchildren up to believe in God, to trust Him and to pray to Him. She made the best fry bread and loved to make it for others. She also loved family dinner and cookouts, to sing gospel songs, especially with her daughter, Pauline. Anita welcomed many family members through the years into her home to have a place to stay and loved them like her own.

On-line condolences maybe made at TheDavisFuneralHome.om