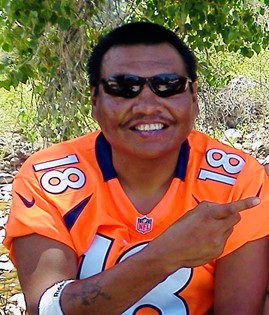 Guestbook 3
Vernon Lance Manderson passed away on Tuesday, January 25, 2022 at the Help for Health Hospice Home in Riverton, Wyoming. Graveside services will be held at 11:00 a.m., Monday, January 31, 2022 at the Arapaho Catholic Cemetery

During Vernon’s younger years, he worked as a fire fighter. Mr. Manderson worked for his dad, Charles Manderson at Pine Tree Construction and also his brother, Thomas Durgin at Durgin Construction as a laborer.

Vernon had so many different names that he went by; his most favorite was Maholic. He was named Smokey by Grandpa Samuel Friday and then settled into Maholic but also went by Vern, Rick Ross, Yellow Fish and Hebe. He gave all his close friends, nick names as well!

He was a friend, a baby sitter to many of his friend’s kiddos and was a very caring and generous man. He loved babies though he had no children of his own. Vernon lived, laughed and loved, cared about a lot of friends and family. He enjoyed basketball and in fact, his Dad made him a hoop 10 foot high so he could learn to jump higher and he did. He was a fisherman and he hunted all year long he was one of the original Aunties Slayer. Football was his game if the Denver Broncos were playing, he was there. He owned over 25 jerseys and was very proud when he got a new one. He was a the biggest Broncos fan. Vernon’s smile was unforgettable and he had the best sense of humor. He enjoyed family gatherings, pow wows, concerts and hanging out with his bros. Vernon loved his music, heavy metal or rock and roll. Some of the bands include Metallica, White Snake, Sammy Haggard, Limp Biscuit, Nirvana, The Beasty Boys, Blondie, Kiss, Cheap Trick, Queen, New Low, Middle Class Rut, Motley Crew, Nickleback, AC/DC and Kid Rock.