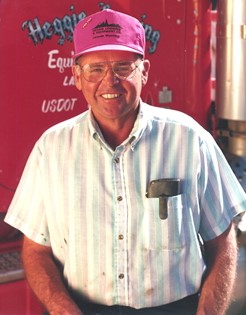 He was born January 22, 1943 in Bemidji, Minnesota, a son to Ervin J. and Gladys (Lease) Heggie, Sr. At a young age he moved with his family to White Sulphur Springs, Montana, where he attended school and shined as a football player at the high school.

Butch married Shirley Mae Hancock on June 11, 1961, in White Sulphur Springs. Together they had three children, Julie, Butchie and Jerry.

Spending many years as a migrant logging family, the Heggies settled in Laramie, Wyoming in 1968. Butch stayed with the business, taking over the company in the early 80s, active as both owner and as a hands-on logger his entire life.

Butch held a private pilot’s license and owned his own plane, taking many trips accompanied by his wife. An avid Broncos fan, he held season tickets and attended playoff games as well as several Super Bowls. Forever community minded, he was generous in local sponsorships from providing the City of Laramie with its public Christmas tree to erecting safety barriers at demolition derbies, supporting the County Fair and underwriting llama shows. He counted among his good friends people from all over Albany County and North Park, Colorado. His commitment to the support of his entire family was unflagging, and he was devoted to every aspect of his grandchildren’s lives.

He was preceded by his parents and a sister Shirley Golen.

Funeral services will be conducted Friday, January 16 at 11:00 a.m. at the Church of Jesus Christ of Latter-day Saints, 3314 Hayford Avenue, Laramie, Wyoming. Pastor Ralph Rohr of Trinity Lutheran Church will officiate. A visitation will be held from 9:00 a.m. until 10:45 a.m. at the church prior to services. Interment will follow at Green Hill Cemetery.

Memorial contributions may be sent to the Meredith and Jeannie Ray Cancer Center or to Hospice of Laramie.