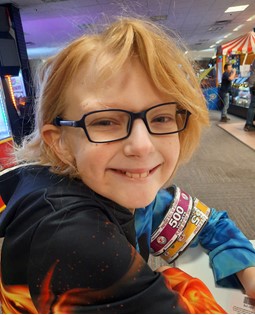 Guestbook 7
Triton James Fritz made his way to heaven on February 13th, at the age of 11, surrounded by his family and the love of his community.

Triton was born on June 11, 2010 in Riverton, WY to Daniel and Jessica Lee Fritz.

Triton has always been full of mischief and adventure. He loved exploring and having fun. On September 9, 2016, Triton was officially diagnosed with cancer and began treatment on September 11th. He began fighting Rhabdomyosarcoma at the age of six and what a fighter! He seldom complained about being poked and prodded. Triton just took everything as it came with determination and acceptance. Over the years, he had various major surgeries including a full liver transplant and Whipple Procedure. He jumped from different chemo’s and had radiation several times. In the end, his cancer simply adapted to any medicine thrown at it. Triton was a fighter who never quit but sometimes we just know when our bodies are done.

During his free time, Triton enjoyed video games, watching funny YouTube videos, playing Nerf guns with his little brother, Derek, sleeping in any chance he got, painting rocks, playing outside and so much more. He had a unique sense of humor and loved pranking his nurses any chance he got.

Triton was recently asked what he hoped people would remember about him. His answer was, “I don’t know. It doesn’t really matter if people remember me. People should just remember to laugh! Remember to actually LIVE. Like really LIVE. I was scared, but still went on a roller coaster and a zipline. Now I know I really lived."

His last word of advice is to, “To just try your best to be kind.”

Triton himself lived his advice and always tried to carry a smile on him, no matter what. And he will be remembered by all those that knew him and were touched by his can-do attitude.

He will be missed by his family – his Dad and Mom, Daniel and Jessica Fritz, his older brother, Titus (18), his sister, Emma (15), little brother, Derek (9), his Grandparents, Jesse and Janice Dorothy of Hudson and Grandma Kristi Fritz of Riverton. His Aunts, Uncles, and numerous cousins all will carry him in their hearts. God had blessed us with Triton and we thank Him for His gift of love and mercy. Until we meet again.

Arrangements under the direction of Davis Funeral Hom.