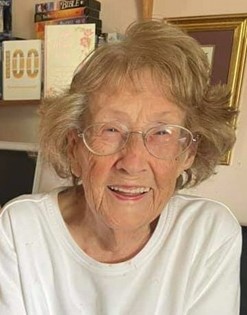 Guestbook 6
On May 18, 1920 Maxine Blanche (McCoy) Arey came into this world as the first child of Ralph C. Mccoy and Ruby L (Curtis) McCoy in Omaha, Nebraska. Her early life was spent in Pella, Iowa. With circumstances as they were, with Mom and Dad working, Maxine basically raised her two sisters, Juanita and Auralea.

On November 12, 1938 she married Don Arey and they had 7 children – Dee, Ray, Kent, Marty, Gene, Bob, and Shannon . . . several died early in life. Maxine and Don traveled back and forth between Iowa, CO and CA as he was superintendent on may jobs especially multiple vortec buildings for airports and numerous other challenging construction jobs. Maxine would read the blueprints to help Don who could not read. They had a season of owning Blakeland Cafe Truck Stop which Maxine managed. After selling the Cafe they began their travels again in the trucking business, with Maxine as navigator, traveling the United states. After Don’s death, Maxine lived in Costa Mesa and worked at Hugh’s Aircraft. With retirement, brought a move to Bodfish, CA for a brief time until she moved to Riverton to be near her son, Marty, and her sister, Auralea, soon followed. She was employed at the Advertiser for a number of years, well into her 80’s, which brough special friends Arlene and Beth into her life. Maxines’ greatest loves were her family, friends, traveling and, of course, coffee. With macular degeneration forcing her to give up driving, she moved closer to her son, Bob, who became her overseer and caregiver. Recently, she moved to Homestead Assisted Living and it is there that Maxine left this world on Wednesday, February 23, 2022 . . just short of 102 years old, when she was received by her Lord and Savior and reunited with her loved ones.

She was preceded in death by her parents, Ralph and Ruby; husband, Don; her siblings, Juanita; her children, Richard Dee, Kent Raleigh, Kenneth Gene and Shannon Denise; her daughter-in-law, Linda and her grandchildren, Denis and Annette.

Please join in a celebration of Maxine’s life and “Going Home” on Thursday, March 3, 2022, 2:00 p.m. at Hillcrest Baptist Church, 1002 W. Main Street, Riverton, Wyoming with Pastor Mike Smith officiating. A viewing will be Thursday preceding the service from 12:30 – 1:30. Following the graveside service, a meal will follow at the church.

In lieu of flowers, the family requests donations to the Help for Health Hospice, Hillcrest Baptist church, or the charity of choice in care of the Davis Funeral Home, 2203 W. Main Street, Riverton, Wyoming 82501.