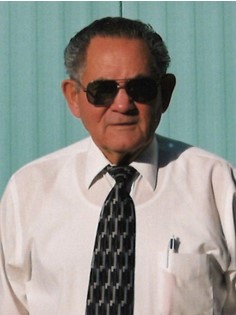 Rev. Oscar G. Garcia (the peanut brittle man) gained his wings on Feb 19, 2022 and went home to be with Jesus. He passed away surrounded by his loving family and friends. Viewing will be from 1:00 till 2:00; service will follow at 2:00 on Feb 28, 2022, at the First United Pentecostal Church 320 S 5th East in Riverton. A dinner will follow the service.

He was born to Nettie and Oscar Garcia on August 12,1930, in Houston, Texas. He graduated from Daisetta High School in 1949 in Daisetta, Texas and was drafted into the Army after graduation. He served in the Korean War.

He met and married his sweetheart in Texas on February 14,1957. They just celebrated their 65-wedding anniversary. He would always introduce her as his bride. He loved his children and grandchildren dearly and he had many friends. He was always happiest around them. He never met a stranger, he loved everyone.

He enjoyed working on old cars, hunting, and helping with numerous odd jobs in the neighborhood. He was the family's handy man and will be greatly missed.

He worked for Houston Oil Co. which became Atlantic Richfield for 35 years. He retired in 1985 and became a full-time pastor for the United Pentecostal Church in Riverton. His church and God came first in his life.