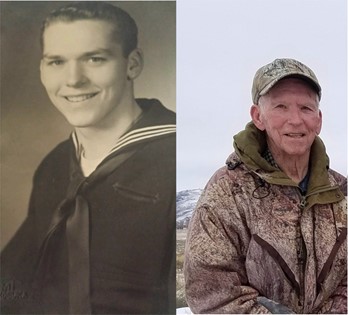 
Robert “Bob” Cragoe, 88, of Riverton passed away on Tuesday, February 22, 2022, with his wife Bernice and children by his side. Robert Bruce Cragoe was born on March 5, 1933, in Jasper, MN to Marge and Harlow Cragoe. He grew up in the area surrounded by family and friends and in 1951, he graduated from Jasper High School, where he excelled in sports.

Bob served in the Korean War with the United States Navy. He entered the service in November 1951 and was assigned to the LST 901, a tank landing ship which also hauled troops and supplies on both sides of the 38th Parallel. Bob also spent a year on a submarine and after 4 years in the service, he was honorably discharged in November of 1955.

Bob married Bernice Elaine Bakke on August 26, 1956, who was the love of his life for his remaining 65 ½ years. Bob attended Minnesota School of Barbering and upon completion of schooling, he opened his own barber shop in Jasper, MN.

He enjoyed big family gatherings and all the great outdoors had to offer and in 1968, packed up their family of five children, mother Marge and Aunt Helen and moved to Riverton Wyoming, where he opened a barber shop, which he continued to run for the next 8 years. Bob left barbering and went to work for UPS and retired 23 years later to pursue what Bernice and kids would call “his professional predator hunting career.”

He enjoyed spending quality time with the family, hunting, fishing, camping, and looking for arrowheads. He loved supporting and following all his children in all their sports activities and later in life it included extended families with grandchildren and great grandchildren.

He is survived by his wife, Bernice, of Riverton: Sons, Rob and wife, Anna of Powell, WY, Mick and, fiancée Kim Nowak of Houston, TX, Randy and wife, Windi of Rawlins, WY, his Daughters, Kelly Hankins of Crowheart, WY, and Kristy Cragoe of Riverton; 17 grandchildren and 15 great grandchildren.

Memorials may be made to the Parkinson Foundation in care of Davis Funeral Home, 2203 West Main Street, Riverton, WY 82501.